On September 10, 2020, the 36th Teachers' Day, Professor Luo Yanhua was rewarded the 2020 Outstanding Teaching Award in honor of her outstanding contributions, by which she is also the first professor from School of International Studies, Peking University who has won this award. Luo commented that this award as one of the highest recognitions of a teacher's educational achievements meant so important to her that she felt much honored to receive it. "It is my great honor to win the prize through a series of highly competitive selections. It is an excellent reward for my teaching career in Peking University." Luo said.

Over the past 32 years, Luo has been working on the front line of teaching and research. "The benefits of students" serves as the fundamental purpose in Luo's classes, by which she has formed a system of her own educational ideal, "student-centeredness, openness and innovation". "Student-centeredness" means to modify the way of teaching to suit the special requirements of each individual student; "openness" means to draw lessons from the course designs of the top universities worldwide such as Yale University, Stanford University and London School of Economics and Political Science (LSE); "innovation" means to liberate teaching method and content from conventions and to keep innovations, by which Luo is one of the first professors using multimedia instruments in teaching before its popularity. Luo's educational ideal is closely connected to her academic career in international studies with a global and interdisciplinary vision.

Professor Luo Yanhua on a conference of United Nations Human Rights Council held at the Palace of Nations, Geneva, Switzerland

International studies with a global and interdisciplinary vision

At the beginning, Luo found there existed apparent differences between studies in university and at middle school. In contrast to the examination-oriented education at middle school, university studies involved inter- or multi-disciplinary courses and put more emphasis on problem-solving researches. To Luo, it was a challenge to broaden her academic horizon.

However, in the 1980s, merely few years after Gaokao was resumed in 1977, it was such a highly-anticipated opportunity to enter universities for further studies, not to mention Peking University that most undergraduates endeavored to learn knowledge with great eagerness as if hungering or thirsting. Luo was one of them. Despite the material deficiency on campus, she was totally absorbed in studies with unquenchable passions, unheard of such things as idling away one's time.

After graduation, Luo continued to finish her master and doctor degrees. During that period, it was her advisor Professor Liu Jinzhi who had exerted the greatest influences on her studies. Luo was then much impressed with Liu's rigorous and persistent academic attitude as well as his encouraging teaching style, which set a good example for her. Nowadays, even at the age of 81, 18 years after his retirement, Liu has still been working on his academic researches. He has won the 2019 Peking University Academic Contribution Special Award for Retired Faculty and Staff, with a 6-volume and over-million-word-count masterpiece about the cold-war history to be published this year. "I show considerable respect for him, and I think I should become like him. Indeed, I have been imitating him." Luo said.

Along with her further studies, Luo increasingly realized the significance of inter- or multi-disciplinary researches. Her major research concerns revolve around the following aspects: human rights and international relations, history of international relations and global public health security. In Luo's opinion, the learning of history lays a solid foundation for studies and researches in all other fields, since every country has its own context of historical development. Besides, a good grasp of at least one foreign language is also a prerequisite, for there are a number of foreign cultures meriting references in international studies. In addition, for instance, the studies in human rights and international relations call for knowledge of international law, and those in global public health security demand insight into public health services and medical sciences. "Maybe you are not an expert", Luo suggested, "but at least you have to handle its basic information and core knowledge." Teaching in the School of International Studies, Luo also went abroad as a visiting scholar or teaching professor several times. As for her, those experiences have equally inspired her teaching and research works, yet completely different from what she has learned from reading books. It is the sense of reality that truly matters. Luo argued, "When going to one country in person, you can discover its multiple aspects. For instance, a supermarket can reflect the price level and economic development of this country; the infrastructure such as bridges and sidewalks can reflect the living condition of citizens. These real feelings are what cannot be found from bookshelves. So when doing researches on a country, it is necessary to go to the local areas for on-site experiences." By the same token, Luo has instilled the global and interdisciplinary vision into her teaching works.

Student-centeredness, openness and innovation in teaching

Graduated with a master's degree (later receiving a doctorate), Luo Yanhua chose to stay on campus as a faculty member mainly for two reasons. One is her enthusiasm for the profession of teaching as the ideal of life; the other is her deep affection for Alma Mater. From Luo's perspective, teaching is a respectable profession. "Apart from imparting knowledge, a teacher is supposed to offer students a positive outlook on life and lead them through confusions." Luo claimed.

Luo's educational ideal—"student-centeredness, openness and innovation"—has been formed by trial and error. In the process, one big challenge is to counteract the side-effects of examination-oriented education. For instance, while studying on the history of international relations, students are supposed to cover the history of hundreds of years since 1648. At the beginning, many cannot help feeling perplexed. In order to cope with the negative emotions, Luo has introduced to students a whole new system of studying methods: to assign reports of deliberately selected reference books and to divide students into groups to accomplish project researches. By this means students get more interested and engaged in history learning. Apparently, as Luo admitted, its success cannot be available without the abundant recourses, paper and digital alike, of Peking University Library. 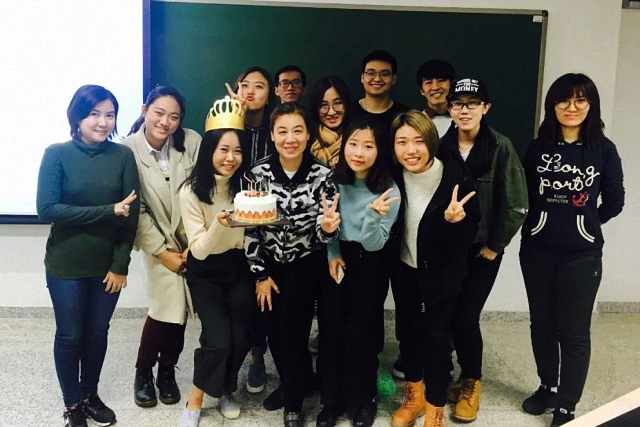 Luo celebrates birthday of her student

Furthermore, to bring students closer to those histories, Luo has took advantage of multimedia technology by presenting oceans of historical documentaries and pictures in class. In order to collect those precious records, she has even gone personally to various libraries, museums and historical sites to take photos during her academic visits and personal tours abroad. All those efforts Luo has made are aimed to establish a bridge between students and those histories. Once there are new records unveiled, new discoveries or new academic achievements, she would do her utmost to bring those results to classes.

As regards "openness" and "innovation", Luo has also drawn lessons from the course designs of the top universities worldwide such as Yale University, Stanford University and London School of Economics and Political Science (LSE) to enrich her teaching methods. For example, borrowed from the examination from Yale University, Luo has attempted to set open-ended test like scenario hypothesis: to make students offer policy suggestions in the role of think tanker serving Stalin or Truman. Hence, students are transformed from the passive observers of history to the active participants. Not only can students' knowledge and ability be examined, but also the examination itself becomes more appealing to exploration.

Luo and her student at the graduation ceremony

One special thing about teaching in School of International Studies is that there exist a number of international students. Confronted with culture shock, Luo has also provided many English reference books and materials which are easier to read for international students, and encouraged them to do researches on their own countries and from their own perspectives. For example, she would encourage Korean students to study on the Korean War. Moreover, Luo has promoted the cultural exchange and mutual learning between students at home and abroad by arranging them into the same groups.

Although in recent years there has been an increasing tension in international relations, especially after the outbreak of COVID-19 in 2020, Luo has still showed a positive attitude towards international studies. "Although there are indeed differences between different time periods, it does not mean students should apply a totally different system of studying methods." Luo stressed, "We have to admit that the pandemic has a huge crush on international relations, but it is phased and I do not think previous theories fail to explain the current situations." Then, she took the cooperation between the US and Soviet Union to jointly solve the global problem of smallpox during the Cold War period, and put forward the question why we cannot collaborate to control the COVID-19 pandemic. It is the history that serves as the key to many current problems. Luo at an international symposium

To Luo, the 2020 Outstanding Teaching Award never means the end but a brand new beginning by which she has more expectations. One thing is to improve the teaching materials, for the textbooks in use appear behind the times. Another is to optimize the age structure of the teaching team by absorbing and cultivating more young teachers for the sustainable development of academic education.

In terms of advice to students nowadays, Luo highlighted two points. One is to shape a rigorous and realistic attitude towards academic researches and the other is to consolidate the base of disciplinary knowledge and professional ability. It is very important to work in the down-to-earth way rather than seek instant successes and quick profits. "Enrich yourself while on campus and do not idle your time away." Luo delivered her message to all students.